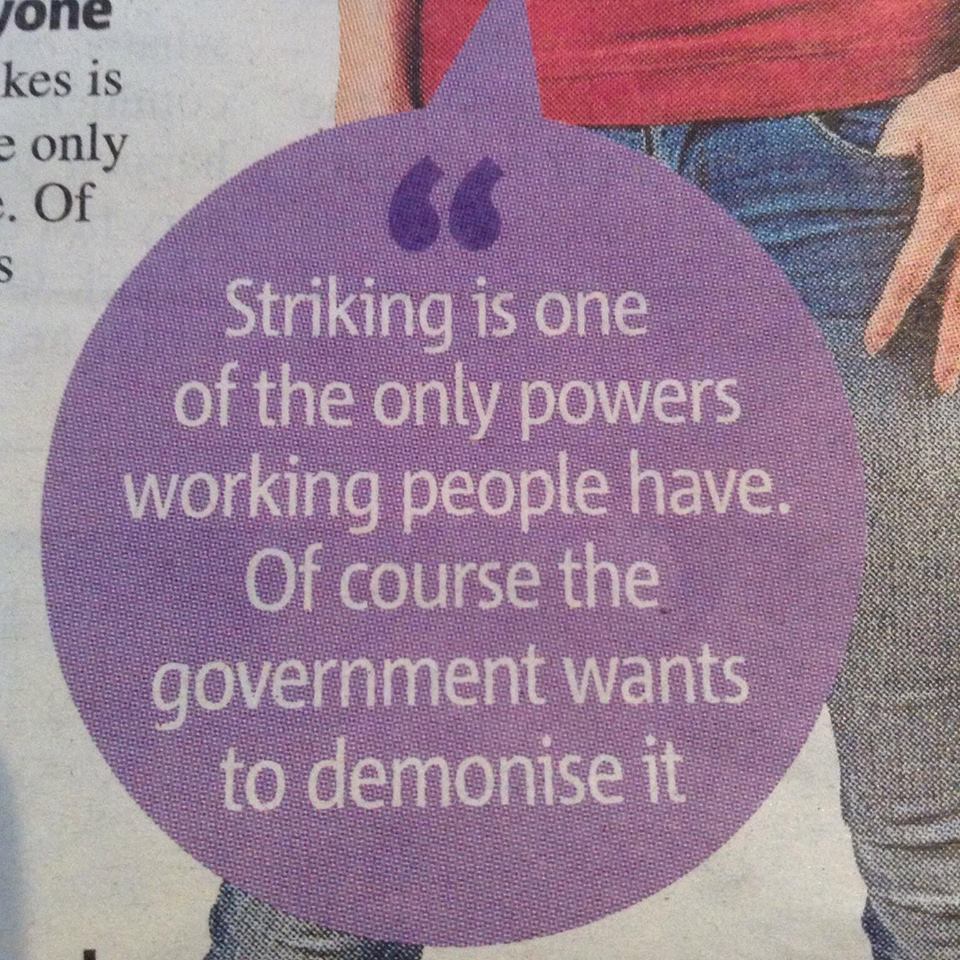 Today in the United Kingdom there is a massive strike of fire fighters, teachers, civil servants and local government staff. I heard on the radio this morning that around 1 million people are on strike. In a country with a population of 64 million, this is a considerably large proportion of the population.

The conservatives would like to place legal restrictions on strike action, requiring at least a 50% yes vote of union members before strike action can be taken. This is a preposterous idea! People don’t always participate in voting, and the numbers are not always what they seem.

In the 2010 general election that brought the coalition to power, voter turnout was at 65.1%. The percentage of votes for the Conservatives was only 36.1%. The people who voted for the Liberal Democrats were vastly not in favour in a Conservative/Liberal Democrat coalition, and therefore, I will not consider Lib Dems votes in this equation. This means that only 23.5% of the registered voters in this country were in favour of the current government. By their own standards, adhering to a rule of action only when 50% of voters agree, they would not be in power right now. Even if the Liberal Democrat voters had been in favour of a Conservative/Liberal Democrat coalition, they would still fail to achieve 50%, with only 38.5% of registered voters having “agreed” to the current government.

Labour – supposedly the party of the working people – is not openly supporting the strike action because of the disruption it will cause. Conservatives, of course, are infuriated that anything should interfere with “business as usual,” since they care far more about business than people. My husband’s union, NASUWT, have decided not to strike, and he is considering changing his affiliation to NUT. My political party, Left Unity, are overwhelming in support of the strikes.

Am I in support of the strikes? No! I support them in their attempt, but I condemn them for not going far enough. What is a one-day strike? Where I’m from, in Pennsylvania, the teachers have an unbelievable amount of power, because when they strike, they do it properly. The walk out – and they stay out – until their conditions are met or an agreement is reached. This means schools are often on strike for weeks at a time.

People often ask me what I like or dislike about the UK. This is one thing I dislike and think the Brits could learn a thing or two from American passion. If you want radical change, you have got to be prepared to do radical things.

TyLean Polley is an avant-garde recording artist. You can get a free download of her music at TyLeanPolley.com